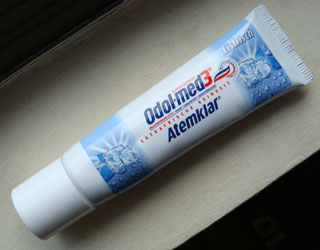 Translation: "extra-fresh pure". This has a very clean, almost astringent taste... think mouthwash. I like the aftertaste - it leaves my mouth feeling, as they say, extra fresh . Of course it falls into the minty category. The paste appears very similar to Aquafresh - but its taste is nothing like that! Odol-med3 is made in Germany and may not be available elsewhere. The glowing ice on the package might not be something you'd see in America; for some reason, ice and toothpaste are not a natural combination here. But I think that pairing is a good one. My friends John & Amy , who live in Germany, sent this one over. (Thank you!) 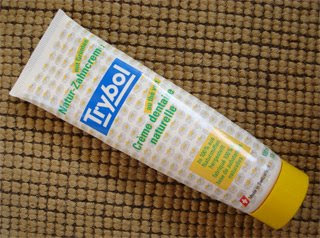 One of my very favorites. Unfortunately, it is not available in the USA. I had some New Zealander friends bring it to me from Switzerland, while they were studying French there. (This transaction happened when we were in Kenya.) It is expensive stuff! My love affair with Trybol began a long time ago. We were flying back from Kenya on Swissair, and they gave the passengers tiny tubes of blue Trybol toothpaste. (And I haven't been able to get that variety in at least ten years.) Anyhow, the green tea variety provides a very unique taste. Wonderful Clean. Fresh. You will notice the product description on the back in three languages - German, French and Italian, in that order. Those are the three main languages of Switzerland, in the order of numbers of speakers.